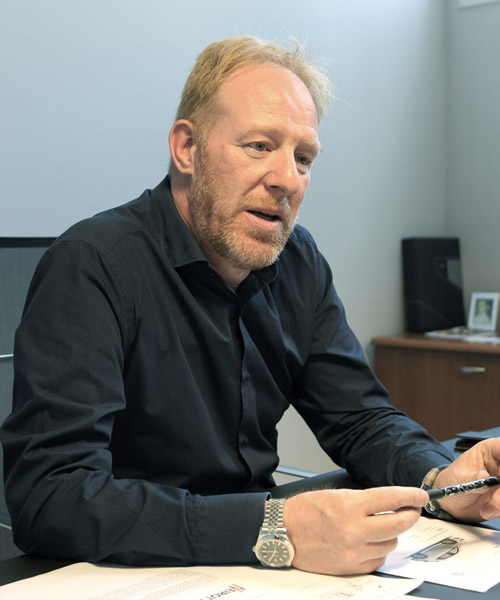 Minimotos, motorbikes and huge projects, instinct and algorithms, looking for the kerb on a double bend at full speed, or the form/function of a continuous façade while drinking a coffee: the hours have always flown by, body and soul, in the office as on the track.

I was born in the seventies and cut my teeth in a Fantic Caballero competition, breathing Castrol and breaking my ribs on the handlebar crossbar after a jump.

We’ve always lived in Trezzano Rosa, my father worked at Falck in Sesto, he went there by bike,.I attended night school for surveyors, classes ended at midnight, I took the last subway to Gessate then hitchhiked or walked 5 kilometers.

First real job in an industrial joinery, office furniture sector, design, planning and production, but at the beginning the humblest tasks: sweeping shavings, emptying bags, and at the end of the day even cleaning the restrooms.

The first machining centers, CNC cutters, g-metric commands, but in the meantime I peeked at the drawings, the designs, my vocation. It was the early nineties: the era of the drafting machine – a tool I’d always used backwards, with the rods mounted in reverse, being left-handed – was about to end.

I was the youngest, I was curious, ready to learn, and when the first software such as data-cad (which was the forerunner of auto-cad) arrived I was the only one in the company who knew how to use it. I especially remember the Mirai graphics tablets .

My passion for design comes directly from childhood, afternoons playing alone with Meccano, with legos, those of the past, a trunk full of bricks, I built buildings, bridges, castles, towers, apartment blocks.

In 1998, after 8 years spent in carpentry designing furniture, I meet someone, an entrepreneur who opens up a new world to me: architecture, the building envelope, the curtain wall, another design scale. It appeals to me, I decide, and I change my job.

I spend nights arguing with the first versions of auto-cad; self-taught, courses would come only years later, it was really a massive mess, sometimes I didn’t understand anything, I was tempted to give up, but giving in was not part of my character or my code, having always had to prove I was up to the task.

The result always depends on mastery of the task, like mastery of the vehicle when you’re on the track: car or motorcycle, super sports car or minimoto, my all-time passions.

Starting as a self-taught designer in a company of craftsmen, I found myself a  project manager after almost 20 years.

Pursuing global technological excellence, after having traveled the world and worked for several companies always looking for a team capable of being faster, at Tecnomont I find it two kilometers as the crow flies from my home.

I thought I could run, but I had not yet met Tecnomont Service.

Now I train every day to be able to keep up with them!